The packing was left till the last-minute and then the small matter of the Italian air traffic control holding a four-hour strike. This meant we arrived at our destination around six in the evening,  losing the opportunity to explore our hotel and the surrounding area in the afternoon, however, we discovered more about the area later.

The Cala Ginepro Hotel serves traditional Sardinian food with familiar ingredients. The fun part about the evening meal is that it is four courses with minimal time between them! After a days travel the prospect of food was the only thing sustaining us. This rapid fire of the courses kept us amused all week.

No matter, a long day of travel ended in fine form with a rapid four-course meal and some reviving cold local beer and white wine. A surprisingly traditional prawn cocktail followed by a fish risotto and then a delicious dish of freshly deep-fried fish and vegetables coated in a perfectly seasoned light breaded batter with huge quarters of limes and lemons. We declined the selection of desserts. Lots of fresh fabulous fish – great start to the holiday!

The following morning we ventured into the village, stumbling upon the preparations for a wedding reception in the larger hotel in the resort. The reception room was beautifully decorated and the tables were lovingly prepared with a vine leaf wrapped flower display. The cake table was waiting for the centerpiece but it looked amazing with some simple and smaller cakes artistically decorated. For the younger guests a table of sweets was set out. Large glass jars filled with handmade sweets and chocolate covered almonds, raisins and much more. Alongside the jars were small white muslin bags with different coloured tapes to tie the contents in securely. The children at the celebration would be lured to that table all evening.

The traditional dishes of lamb, goat and pork were served daily according to the hotel information. We were treated to lamb on the bone with mint and a white wine sauce. Beef olives but with little sauce, lots of seafood risotto and a sumptuous selection of salad leaves and pulses to make our own salads.

A day out was required and we chose Orosei. It was hot, fascinating and fun. Taking the bus south on the SS125 and cresting a hill the bay of Orosei was laid out beneath us. The farmland was being irrigated and the sea was a shimmering blue carpet away to the left. On arriving in the Piazza du Popolo it was time for a coffee in a perfect little café and bar. Then off explore the town. The walk consisted of a four-mile tour around the town, including exploring the prison, churches and museum. Finally, a long hike out to the sea. Orosei has a lovely beach with some beautiful nature reserves behind the golden sand. You can, if prepared with the right equipment watch eagles, kingfishers and flamingoes in the lagoons. It was enough to spend a bit of time on the beach and then walk back to get a late lunch at Bar Manu.

Starting with delicious music paper bread and a bowl of amandine clams, mussels and spaghetti in a light olive oil and parsley dressing, accompanied with a platter antipasto of squid, swordfish, sea bass in olive oil and orange dressing. Sampling the local beer, which is great, and the fabulous Torbato Prosecco from the Sella & Mosca vineyard near Sassari on the west coast of Sardinia. This became the favourite drink before eating. What a great way to relax and divine way to end the day in Orosei!

Our beach is organised and has the obligatory rows of brollies and loungers. The sand is grey and coarse but the sun was a delight. A day of soaking up the UV interspersed with cups of cappuccino and then a tasty Panini for lunch. The bread itself was the size of a side plate in diameter and it had the best crust with soft fluffy inside cradling the salami, cheese and tomato. Ideal beach food!

Using the local bus, which is cheap, regular if off timetable at times, we left mid morning. Passing through the beautiful village of Santa Lucia we arrived in La Caletta. A short walk taking in the sights of the centre of the town, then on to the harbour and the goal of a coffee was achieved! The coffee never fails in these cafes and bars. They are made with care and are beautifully aromatic, smooth and full of flavour.

The weather was not the best so we explored the long expansive beach but decided to look for a place to have a leisurely lunch. Second goal achieved when we found the beachfront restaurant of Meloni and Fresu.

The next day we decided to look in the area surrounding Cala Ginepro. What a treat! On one post breakfast perambulation we passed the Relax restaurant. Mental note made to try for lunch later that day. Continuing the walk we went in a circle and found a pine tree covered sea front with a long expansive beach. It was nearly 11am and the beach was littered with a few relaxing sun worshippers. Lovely!

The Relax, is aptly named, just a few hundred yards from the hotel. A real find with local Sardinian dishes, freshly cooked ingredients with taste and simplicity. Its owner had worked in Edinburgh and his english was great. It transpires that “local” food is a big thing in Sardinia. The restaurant aims to source locally for everything. Blessed with fresh seafood is a huge plus, then with the pasta, vegetables and meats (fresh & cured) there is a lot going for the chefs in Sardinia. His treat was to offer us a glass or two of Torbato Prosecco. 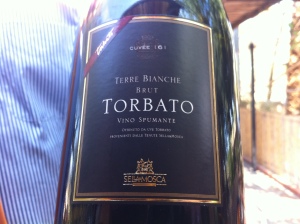 Once found you have to test it out so we had lunch there two days running. Day one consisted of local cured meats plate with a chunk of pecorino and some green olives. A simple dish full of different flavours and textures like the meat platters that are served at 1855 Wine Bar & Bistro in Oxford.

Then followed two fabulous pasta dishes, the first, a traditional mixture of potato and pecorino wrapped with a pasta coat covered in a fresh tomato sauce. The other dish was the Sardinian pasta with clams and chunks of tuna with the tomato sauce and diced tomatoes. Wonderful! Several drinks later, feeling more relaxed we found the beach!

The following day we went back for lunch to the Relax. This time we had a platter of Frutti Misto.

Superbly fried fresh squid, prawns, and tuna in a light crisp batter. Seasoned to perfection, served with a salad. Perfecto!

The music sheet bread that comes with every meal is subtly seasoned and designed to tickle your taste buds. It can be seen on the right of the seafood platter. It is wonderfully simple!

We discovered that our hotel had a 5-hectare garden where they grew a wide range of the salads and vegetables used in the kitchens. So we took time to have a look at the work and produce they get from the garden. After a quick walk around the hotel we found the garden and the first impression is a well organised and managed area using olive trees to delineate areas and crops. The olive trees provide a huge crop of olives with which they make their own olive oil, which we had been using every evening.

As you can see from the pictures below the garden is beautiful. The irrigation system is well-managed and the gardens keep up a continuous supply of succulent lettuces, pepper, cucumbers, aubergines, basil, parley, celery and much more. The salad we can vouch for as that was a delicious and essential part of the evening meal.

Some thoughts on Sardinia.

We stayed at the Cala Ginepro Hotel. The room was fabulous and the facilities, pools, bar and restaurant are excellent.

Sardinia is approximately the same area as Wales, which means that there is a lot of island to see. What we saw and experienced was wonderful and the temperature in September through to October is about perfect. The sea temperature is also perfect. Away from the hotel beaches you will find many lovely beaches and coves. Perfect for a quiet day on the beach. Beach – almost deserted away from the resort outpost

Oh – if you are wondering the significance of the four heads on the Sardinian flag, we asked a local. The four heads represent the heads of four Moors found on the battlefield at Alcoraz in 1096. It was said that St George appeared and aided King Peter I of Aragon to victory, hence the St Georges flag and the four heads .

Here is a list of places we stayed, visited and ate. There is more to see so we plan to go back!

Highly recommend Sardinia for the sun, sand, sea, food, drink and activities. Lots to do and enjoy! The impression is that the British have not found Sardinia yet, they are more geared up for the Italians, Germans and French. It is unspoilt and waiting to be discovered – put Sardinia on your list of places to visit.

This site uses Akismet to reduce spam. Learn how your comment data is processed.

We use cookies to ensure that we give you the best experience on our website. If you continue to use this site we will assume that you are happy with it.OkRead more